Passing through security at Tokyo Haneda airport shortly before midnight I realised that saving a few pounds on the flight was little comfort to the fact it was still a couple of hours until departure with a planned arrival at Incheon Airport just before 5am. It would then be a long wait until I could check in to the hostel in Seoul that afternoon; dirty, exhausted and cursing my past frugal self.

Fortunately, however, I had found rumours of a secret treasure hidden in the airport for weary travellers like me, Spa on Air, a place to shower, relax and sleep after arriving or before departure.

Unfortunately finding the place was a lot harder than it should have been and there is little information, even on their website about details, so I’ve decided to make this short guide to help anyone else who finds themselves with half a day to get through at Incheon Airport.

What is Spa on Air?

Spa on Air is a small airport spa on the basement level of Terminal 1 at Incheon Airport. It has toilet, shower, hot tub, sauna and sleeping facilities for a reasonable price to help recover from a flight or get ready before departing. It is land side so you don’t need to go through security to get there.

How much is Spa on Air?

I paid 20,000 Korean Won, just under £15 at time of writing, for 8 hours. 7 hours was 19,000 and the price reduces the less time you need. You can also pay for private sleeping rooms which of course cost more.

How does Spa on Air work?

When you arrive you’ll be asked how long, in hours, you’ll need with a price list in front of you. They accepted my credit card and didn’t need to see any passport or boarding pass. You can check large luggage at reception and you’ll be given some towels, some pyjamas, a locker key and access card.

You can keep your hand luggage with you and make sure you have a change of clothes and toiletries in there.

Take your shoes off in reception and go to the relevant locker room where the locker key opens a small cabinet for your shoes. Don’t panic about your hand luggage not fitting, there’s a bigger locker further in the changing room that the same key opens. Both lockers match the number on the key.

Now here’s where it gets a bit interesting. The hot tubs and showers are run in traditional Korean ways, ie communal and nude.

What this means is you’ll see plenty of naked people wandering around. Any self image problems I might have had were removed by nearly 24 hours of being awake and a desire to clean up and sleep.

For obvious reasons I can only be specific about the male facilities but I’m sure it’s similar in the opposite rooms.

Once stripped off enjoy a hot shower and then you can sit in one of 3 hot tubs until you’re suitably poached. Although it was quite busy I never had to share as people moved through quite quickly.

When you’re done and possibly showered again change into the pyjamas provided. Although I’m 6’2″ and, let’s say, generally larger than the average Korean, the pyjamas fit fine.

Then using the access card you can go into the sleeping area. This is mixed gender and consists of a small room with various mats, sleeping couches and cushions to find a spot and get some rest. The only downside was the noise during the early hours, it appears between 5 and 7am are the busy times with people coming in and leaving. Things quieted down after 7/8am and room emptied out gradually over time.

The only thing I’d change if I returned would be reserving a private room ahead of time so it would be quieter and less disturbed.

Nevertheless I did manage to get a few hours sleep and on waking returned to the shower, got dressed and collected my luggage.

A nice touch is free amenities in the changing room including combs, hair dryers, various beauty products and water. There are vending machines for forgotten toiletries such as toothbrushes however they only accept cash in Korean Won, not great if you’ve forgotten to change up any money first!

Overall a great value for a little over £10, much cheaper than a hotel room for half a night and a great way to feel refreshed after a long day.

Where is Spa on Air?

Go to floor B1 in Terminal 1 of Incheon Airport on the Eastern side.

From International Arrivals this is down 1 floor. For some reason there are no signs from arrivals to get you to the right place so follow signs for Airport Railway down to B1, just don’t follow them any further once you’re on the right floor!

There are various elevators and escalators which will take you down from Arrivals or Departures.

If you’ve arrived by AREX you should already be on the right floor. 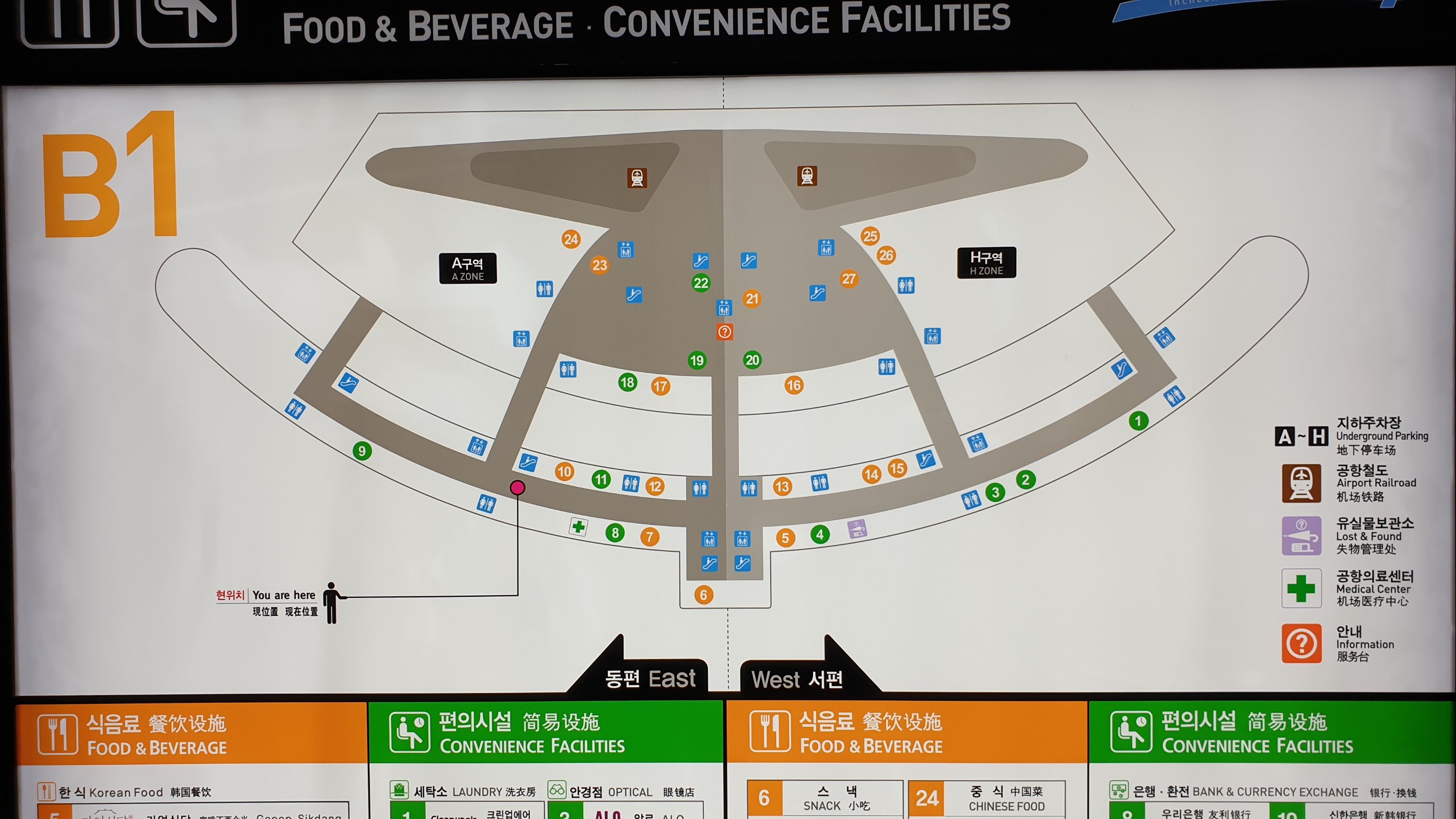 On the map above the Green 9 on the bottom left is the location of the Spa. Click to enlarge.

Update Oct 9th 2019: This is by far the most popular post on this blog, if you found this I hope it proved helpful. Please let me know in a comment how your experience was and have a great trip!

This site uses Akismet to reduce spam. Learn how your comment data is processed.

All opinions are my own and I have not been paid or given anything in exchange for reviews or mentions unless otherwise stated.